Obesity is a chronic, relapsing medical condition for which there is no "cure," only ongoing treatment which will ameliorate the condition. For obese patients, surgerical intervention is an option and is frequently the treatment of choice. Generally, the criteria include both of the following: 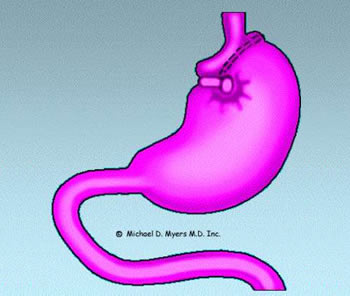 The gastric restrictive procedures are infrequently performed at this time. The vertical banded gastroplasty (VBG), sometimes with additional reinforcement of a small silastic (plastic) ring is one variation.  In VBG, the stomach is "stapled" to reduce its capacity to approximately 15 ml. (1/2 oz.) and a silastic ring is inserted to help prevent the stomach from "stretching" in size. What is formed is essentially a small stomach "pouch" that receives food from the esophagus and a much larger, unstapled stomach that receives small amounts of food from the proximal "pouch". When one eats, only a small amount of food can be consumed without the pouch becoming distended. This generally leads to an early feeling of satiation or fullness. If one continues to eat, one will develop nausea, vomiting, or pain, which generally results in the termination of eating. Patients must adapt to their new, restricted stomach size and restrict their food intake to prevent vomiting and pain. Complications can result from the surgery. When gastroplasty is done by well-trained physicians, the mortality (death rate) from the surgery is under 1 %.

Complications include risk of infection, obstruction (blockage) of the outlet, necessitating surgical revision; development of blood clots in the legs or lungs; bleeding; metabolic or nutritional deficiencies (including protein calorie malnutrition); and recurrent vomiting. Although uncommon, it is possible to slowly develop vitamin (especially vitamin B-12) and mineral deficiencies resulting in anemia or osteoporosis (softening of the bones) after this surgery. Post-operatively, the patient must be followed by physicians who are familiar with the long-term complications and required long-term treatment.

The effectiveness of the surgery is fair, with loss of 40 to 50% of excess body weight with generally 50% of the weight loss being maintained after 5 years. It is common for the body weight to slowly increase after the first or second year.

The surgery requires a modified diet to prevent nausea and vomiting and to help prevent other long-term side effects. Additionally, one can (partially) bypass the "restriction" by eating calorie-dense liquids such as ice cream or regular soda. Long-term changes in eating habits must take place in order for the surgery to be successful. Vertical Banded Gastroplasty, however, is a viable treatment alternative for obese individuals. 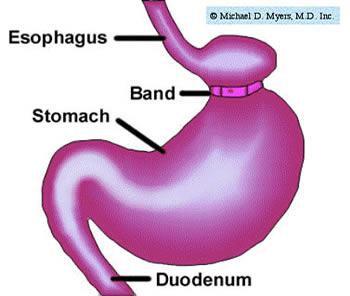 Another restrictive gastric approach is laparoscopic gastric banding. This procedure, which was approved in the U.S. in June 2001, is popular since it is "high tech" (utilizes a laparoscope, an instrument which is inserted into the abdominal cavity) and recovery time is only a few days. Basically, an adjustable band is placed around the upper portion of the stomach, resulting in (essentially) a much smaller stomach. This restricts the amount of food that can be eaten, similar to the vertical banded gastroplasty (see above).

The European literature (where the procedure has been performed for a longer period of time) shows that weight loss is similar to that seen with vertical banded gastroplasty. Clinicians in the U.S. report less weight loss than our European colleagues. Complications include band slippage, erosion of the band into the stomach, dilation of the esophagus, and infections, many of which require removal of the device.

Mean estimated excess body weight loss and complications from a study published in Obesity Research 2008 are as follows:

The lap band is, in essence, a variation of an old surgery (gastric banding) that was abandoned in the 1980's because of a high incidence of complications (bleeding and obstruction). This newer approach is less invasive than the "old" banding procedure and the band can be adjusted (tightened or loosened) as appropriate. Many clinicans recommend this procedure for older individual (60-65 years old) who would otherwise not be a candidate for surgical intervention. 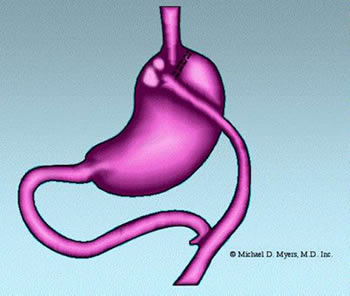 Arguably, the "gold standard" in obesity surgery is the Roux-en-Y Gastric Bypass. This procedure involves both a "restrictive" procedure by decreasing the size of the stomach by stapling across the top of it and a "malabsorptinve" component, achieved by bringing-up and attaching a portion of the small intestine directly to the stomach (thus "bypassing" part of the small intestine ). This surgery is much better tolerated than the "old" intestinal bypass surgeries done in the 1960s and early 1970s , but still results in significant nutritional deficiencis long-term (see below).

There is usually only mild malabsorption of nutrients (as compared to the old intestinal bypass surgery). This surgery causes gastrointestinal hormonal changes, which result in decreased hunger and improved satiety or fullness. Individuals undergoing this surgery will lose significant amounts of weight (mainly body fat as opposed to lean body mass or muscle tissue). Weight maintenance is generally excellent with small increases in weight occurring over subsequent years. Like any obesity surgery, the patient will require lifelong medical follow-up and treatment of the medical complications that usually occur, especially the vitamin B12 deficiency and anemia.

This procedure is now usually laparoscopically, which offers a faster surgical recovery, but with the potential for more severe surgical complications.

For more information you can watch a video outlining the procedure.

In these procedures, the digestive juices from the liver and pancreas are diverted to the distal small intestine near the entrance to the large intestine.  Thus, food enters the stomach, rapidly transverses the distal small intestine (where absorption of nutrients primarily occurs), and is then delivered to the large intestine (where excess water from the stool is removed). This results in marked malabsorption of nutrients with subsequent marked weight loss (up to 80% of excess body weight). Since there is marked malabsorption of essential nutrients, the probability of vitamin, mineral, and protein-calorie malnutrition is significant. These procedures are generally best avoided since the marked nutrient malabsorption can result in severe long-term complications.

The above information is for general purposes only and should not be construed as definitive or binding medical advice, diagnosis or treatment. Because each person is medically different, individuals should consult their own personal physicians for specific information and/or treatment recommendations.